On Sunday we went up to Zion National Park for a picnic and to roam around in nature for a bit.  I adore Zion.  It's so much more intimate than the Grand Canyon... I really feel like I can get *in* the canyons without killing myself or requiring a pack mule. One minute you're in the canyon and then a simple drive up and through the tunnel and you're above them looking down and in an entirely different world with the massive crossbedding in the red and white sandstone.  Just sheer beauty. Plus, it's not so large and grandiose that it doesn't overwhelm you.  It's odd, but I relate the three canyon parks to three Pink Floyd albums.  Bryce Canyon is Wish You Were Here... small, sharp, and exquisitely beautiful to the point that sometimes you want to cry to see/hear it.  Grand Canyon is The Wall... massive, a spectacular achievement, and almost so overwhelming it's hard to appreciate.  And Zion is Dark Side of the Moon... welcoming, encompassing, and gorgeous in it's own right.

Photos are behind the cut (and believe me, they don't do it justice)....

The Virgin River... we played around here for about an hour.  The four year old was making sand angels and the seven year old was poking many things with a stick. 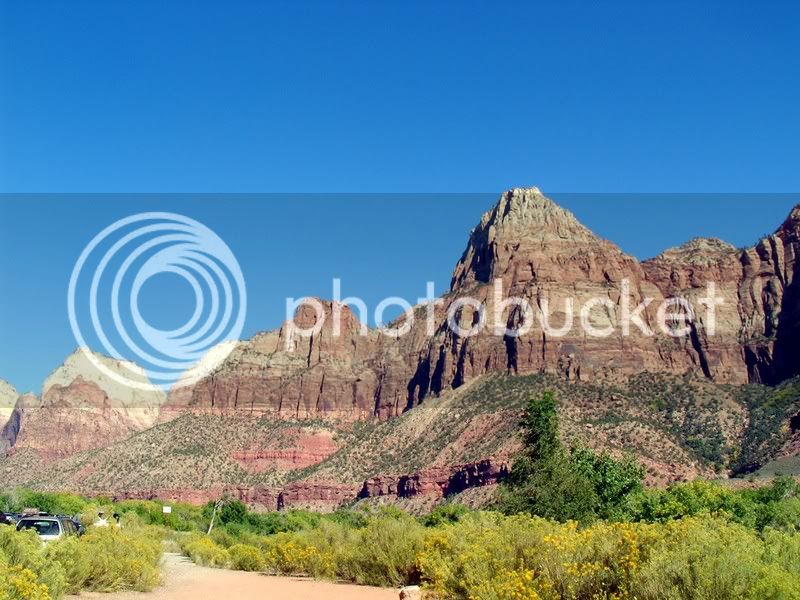 Near the entrance of the Park.

Up above the main canyon looking into a smaller canyon.  The maple trees were turning and were the most amazing red.  So I had to take a few pictures of those.

Another view with the trees in the canyons and the crossbedding above.

Big Horn Sheep... the ram had just moved down and out of view when I took the photo, but there was another ewe just off to the left and behind the rocks.

TIny little frog my son found (he's holding it so you can see how tiny it really is.)  The photo just doesn't show how silver it really is.  We put him back to finish sunning himself on the rocks in the dry stream bed we were walking in.

October 15 is supposed to be the day bloggers post something about the environment.  I'm a few hours early here (at least in my time zone).  But I hope by looking at the photos I've posted you feel a little more inclined to preserve the beauty these few and far between spaces provide to us.