Sorry this took so long to post!  My betas got busy with real life and playing with new toys *G*.  But huge huggggggs to both Koschka and

kodiak_bearfor the wonderful help they have given me with this fic and I promise the posts should come much quicker now.  Again, this chapter has more images than the last, so those with slow connections be warned.  Finally, the Cosmo quiz is an actual Cosmo quiz, but you'll never find it in a magazine looking like this. 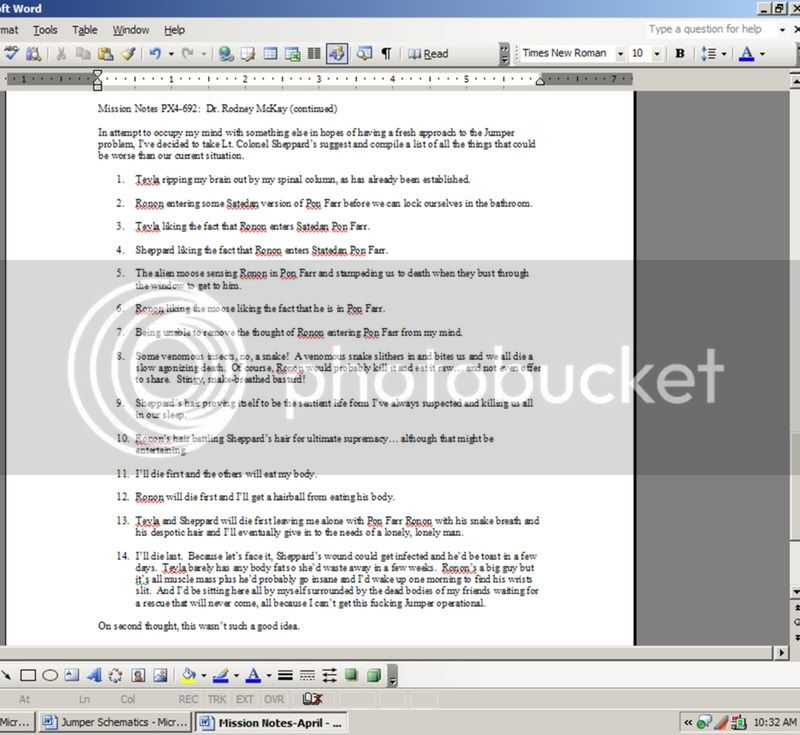 Rodney seemed to be deep in thought, making entries in his pad. So, Sheppard turned his attention to Teyla.
“Anything interesting in the magazine?”
She didn’t look up, just continued to flip the pages with sharp, staccato motions. “Yes, there are many interesting items in this magazine.”
John waited for her to elaborate but when she didn’t, he tried again to make conversation. “So, where did you get it, anyway?”
“Elizabeth lent it to me.” Three more pages snapped past and she said no more.
“Do you always bring fashion publications with you on away missions?”
She sighed in irritation of his continuing questions. “Is that a problem if I do?”
“No, no, not at all. I was just curious is all.”
“If you must know the details of the situation, Elizabeth gave it to me when we returned from our last mission. I simply slipped it in my pack and forgot to remove it.”
“Well, then, lucky you.”
“Yes,” she gritted, “lucky me.” Finding something that caught her eye she inquired, “Do you have a pen or pencil?”
“What?” Why in the world would she need a pen?
“A pen,” she reiterated with absolutely no patience. “A writing utensil, a tool with which to make a permanent marking on a piece of paper or other surface.”
“Uhm, sure. I have a Sharpie in my field vest.” If he had been able to back away from her a little further, he would have. Unfortunately the bulkhead was in his way.
She retrieved his vest from where it was folded on the floor, found the marker, and returned to her seat, starting to make notes in the magazine. John decided, wisely so, that it would probably be best not to interrupt her.

When Teyla snorted to herself for the third time and accentuated what she had just written with a violent stroke of the pen, not to mention gleam in her eyes, John figured it would be a good time to go see what Ronon was up to where he sat with his feet propped up on the front console of the Jumper.
The moose were still outside and the Satedan seemed to be studying them intently. Just as Sheppard was about to stand, Ronon leaned forward and breathed on the glass of the window in front of him forming a hazy film of condensation on the windshield. He then used his index finger to draw an image that John couldn’t make out from his seat. Curious, Sheppard moved up behind his teammate, tilting his head and squinting, trying to see the artwork.
“What are you doing there, big guy?”
At the sound of John’s voice, Ronon reached out a hand and smeared the picture away before he could see it.
“Just cleaning the window,” he said abruptly.
Sheppard decided it was probably for the best not to call him on the lie. “Ah. Trying to get a better view of the moose?”
“Moose? Is that what those animals are called?”
John sat in the pilot’s seat and cradled his arm in the sling. “Well, there’s something similar back on Earth called a moose, only less… fluffy.”
Ronon considered the animals for a moment before asking, “These moose, are they domesticated and ridden like your Earth horses?”
“Not that I’ve ever seen. Although the person to talk to is McKay; he comes from moose country.”
Rodney rolled his eyes but didn’t look up from his computer. “Yes, there’s a special battalion of Mounties that ride moose. They used to be an elite fighting force but now their role is much more ceremonial. They act as an honor guard for the Prime Minister on national holidays and when dignitaries like the Queen and Celine Dione are in town.”
Evidently Ronon missed the sarcasm in Rodney’s comment because he pursed his lips and nodded his head in consideration of what he had just learned. John started to tell the Satedan that McKay wasn’t really serious, but, not wanting to have the man lock himself in the bathroom again for being made fun of by the scientist, he kept his mouth shut. He did, however, shoot McKay a nasty look for being a smartass.
He also figured it would be a good idea to change the subject. “So, see anything besides the moose?”
“Trees.”
Now it was Ronon’s turn to receive the ‘you’re being a smartass’ frown. “Anything besides the blatantly obvious?”
With a dramatic crane of his neck to take in the entire Jumper, the large man answered, “No.”
Okaaaay, so much for having a conversation with Ronon. John stood again as he told him, “Nice talking with you, Ronon.”
He received a wave of a hand without a look back in response. When Ronon was pretty sure Sheppard was out of viewing range, he breathed on the windshield and started sketching once again.

After sitting back down on his bench, John considered his options of what he could do to entertain himself. None of his teammates seemed to be in a talkative mood. He couldn’t clean his weapon or much of anything else with a bum arm. He’d just woken up from a nap so he couldn’t go back to sleep and it had only been a couple of hours since they ate.
“Hey, McKay, do you have anything to read in your pack?”
“Do I look like a public library?” the scientist snapped irritably, continuing to make notes on his tablet.
“Excuse me for thinking you might have a scientific journal or something.”
“Well, regardless of the fact that some members of the team feel my work is subpar, I don’t actually carry study materials with me when I go off-world.”
Teyla’s only response to his meaningful glare was to flick to the next magazine page.
“What are you doing anyway?” He hadn’t even peered into one of the control panels since John had sat and talked to him.
“Oh.” McKay seemed a little caught off guard by the question. “I’m making mission notes.”
“Mission notes? Well, give me a turn at making some mission notes.”
“Sheppard, you have no intention of entering any mission notes. If I give you this computer, all you’re going to do is play Tetris.”
“Rodney, my right arm is clipped. I can’t run the controls for Tetris with just my left hand. Besides, as the team leader it’s my responsibility to keep a log myself.”
“There’s hardly any battery time left, barely an hour.”
“All the more reason that I do it now.” McKay seemed to consider and John pushed his advantage. “I won’t even use half the time, I promise.”
With an exaggerated sigh, Rodney handed over the tablet. “I swear to God, Sheppard, you better not waste this playing Tetris.”
“Scouts honor,” he promised with fingers raised and took the computer with a greedy grin.